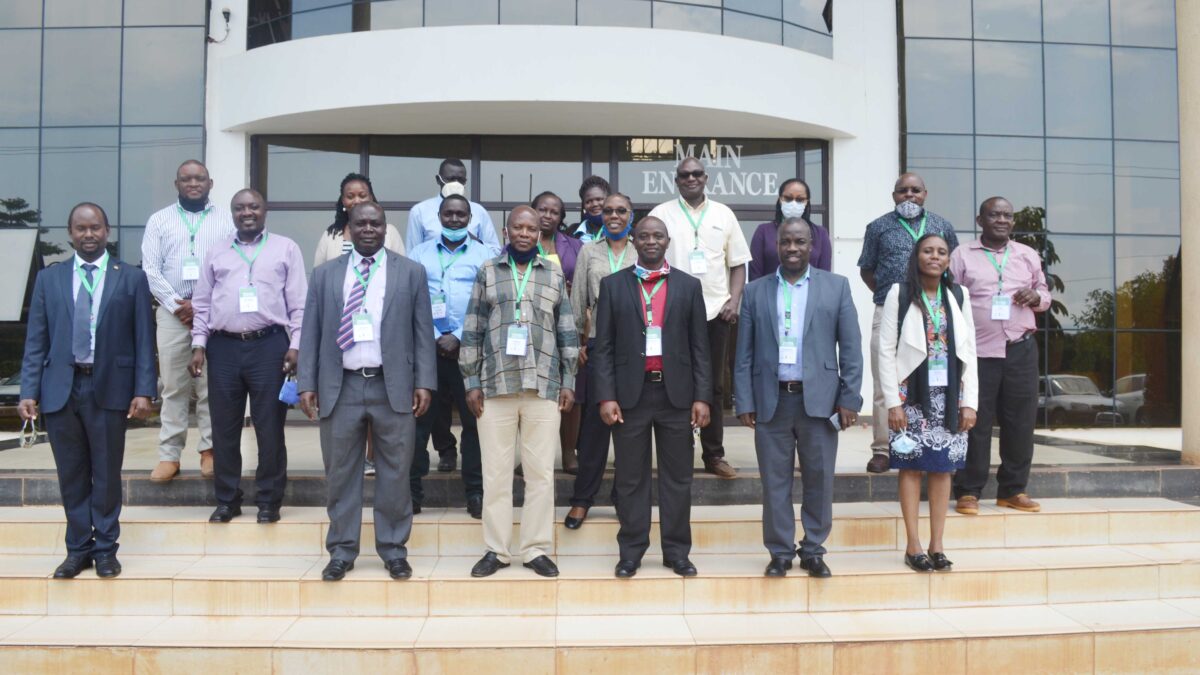 Group Photo of Participants at the inception meeting of the Afalasafe project at Namulonge Agriculture crop resources institute.
uncategorized

A cross section of stakeholders have embraced a new project by the international institute of tropical agriculture (IITA) to control and mitigate Aflatoxin at farm level using a biological control product called Aflasafe. The stakeholders who included grain traders, academia, Farmers, media and Policymakers welcomed the four year project recently launched in Uganda aiming to Improve income and nutritional health of farmer families and generate wealth by improved food safety in the maize, sorghum and groundnut value chains. According to Ms Harriet Nabirye the Chief Executive secretary Uganda The Grain Council Uganda said the project was to solve a Uganda’s grain trade dilemmas and increase market prices for the Farmers.

“Uganda is one of the biggest grain producers in the region, but our grain goes to waste because of Aflatoxin contamination, we have been hearing about this Aflasafe for years, but it had not reached Uganda, our Farmers have suffered with the Aflatoxin dilemma for long and received poor pay for grain because of Aflatoxin, we welcome this project and are hopeful it will help us scale grain quality and pricing in Uganda.” Said Nabirye

“Ugandan grain has been rejected by our neighbors, we can not get premium prices and this translates direct to the farmers, to Aflasafe if well developed and awareness created will help address our current problems” add Nabirye.

The project called “Development and commercialization of Aflatoxin biological control products for integrated Aflatoxin management in Uganda is implemented and financed  by a consortium that includes  ITTA, Agribusiness development initiative development(ABI Development), Alliance for green Revolution in Africa (AGRA) and the National Agriculture Research Organization (NARO)

management practices to minimize contamination of maize, sorghum and groundnuts

“This project is going to develop, validate, and register at least one biocontrol product (Aflasafe) for aflatoxin management in maize, sorghum and groundnut, we shall also create aflatoxin awareness among stakeholders along crop value chains to enhance  knowledge and use of the management strategies for Aflatoxin mitigation centred on pre-harvest use of biocontrol products, best agricultural and post-harvest management practices.” Said Mahuku,

Dr Mahuku further disclosed that the project plans to Develop and implement a strategy for commercializing Aflasafe and ensuring wide distribution and availability to stakeholders and An Aflasafe product that can reduce crop Aflatoxin content by more than 80%compared to non-treated crops registered for use in Uganda. The project will focus on three key crops which include Maize, sorghum and groundnuts.

According to Mosses Monday Paga, Project manager Food crops at ABI-Development, one of the major funders of the project, Aflatoxin was a key problem among Ugandan farmers, and for agribusiness to flourish, it was important to invest in any innovation towards scaling products that mitigate problems.

“ABI is glad to be part of the project, we want to boost research to enable our Farmers get a good product that ushers them towards good prices for their products, as ABI, we hope that by end of the project we shall have a solution product available on the market and also push for good premium prices for product developed grain to motivate farmers.”Adds  Paga

Giving an overview on Aflatoxin in Uganda, Professor Archileo Kaaya the head of department food science and technology Makerere University and chair National Aflatoxin technical working group, reports that Aflatoxin research in Uganda started in the 1960s but there is a very slow trend on implementing research findings.

“Researcher and scientists have been frustrated due to failure to operationalize research findings, but Aflatoxin is real and it cant be stoped by putting on masks, A recent pilot study to evaluate Aflatoxin exposure in rural South Western Ugandan population indicates that Every adult and all but four children had detectable Aflatoxin adduct, including five babies reported to be exclusively breastfed .this is high but going unreported, we can no longer dispute the increased cases of liver cancer in Uganda.” Said Professor Kaaya.

Dr Godfrey Asea,. The director NACRRI thanked IITA and other partners for bringing this project to Uganda, saying NARO had done a lot of research interventions towards Aflatoxin mitigation and control, however, these have not been scaled or commercialized due to some protocols.

“NARO over the years has put emphasis on prioritization of Aflatoxin management and grain quality, we have done Host Resistance breeding where we have Screened breeding and product pipelines of maize and groundnut, Assembled Aflatoxin- resistant

Dr Asea adds that NARO had also conducted some Artificial screening for resistance to Aspergillus , where there was an optimized protocol to screen for Aspergillus resistance, Evaluated pipeline inbred lines and hybrids for Aspergillus and also Observed genetic variation for Aflatoxin accumulation resistance in kernels.

Through the APPEAR project funded by USAID and USDA, NARO has also carried out Baseline surveys on pre-harvest contamination of maize and further Characterization and Identification of Atoxigenic trains to constitute at least two Aflasafe products. Preliminary findings in the baseline survey indicated that there were high levels of Aflatoxin contamination at farm level, Positive correlation of Aspergillus incidence with Aflatoxin levels and that Poor grain handling at farm level- major factor for high Aflatoxin levels.

The project will focus on two key objectives of product development and increased awareness on the problem of Aflatoxin. The commercialization of the product will be at a later stage.

Aflatoxin is a highly toxic, cancer-causing poison that contaminates food. It is a mould that affects grains poorly handled at harvest and post-harvest points, if consumed it builds up in our bodies and damages our health. It is lead cause of liver cancer, makes us weaker against other diseases and stunts children’s growth. In some cases it can be fatal.

In large amounts Aflatoxin can make us ill or kill straight away, but most of the time we eat it without noticing. It acts like a toxic fifth column, gradually infiltrating our bodies and building up within us. Like the most dangerous of secret agents, it can be present undercover for many years doing long-term harm, and is very difficult to detect.

Aflasafe is a safe natural solution to the problem of Aflatoxin, homegrown in Africa with help from partners in the USA and Europe. It works from the plot to your plate to stop contamination from reaching dangerous levels and keep foods like maize and groundnuts safe to eat.

Aflasafe tackles toxic tragedy using harmless types of Aspergillus flavus. Surprisingly, this is the same kind of fungus that produces Aflatoxin, but in this case they are kindlier cousins that do not and cannot ever produce the toxin. Each country has its own version of Aflasafe using a mixture of four fungal strains, all found growing naturally in local soils. The friendly fungi are coated onto ordinary sorghum grain, which acts as a vehicle to help them get established and can easily be broadcast onto fields.

It seems strange for the same fungus to be both poison and cure, but it is a bit like sending a thief to catch a thief: only Aspergillus can stop Aspergillus.

Farmers apply Aflasafe to their plants early on, and the friendly fungi occupy the growing food before the dangerous ones can get a toehold. Aflasafe might look like a poacher but it is really a gamekeeper, staking out its territory and making life difficult for the bad guys.

Almost everyone in Africa has been exposed to Aflatoxin, building up in our bodies over years of low-level exposure. While we will never be able to pin down an exact number, it is clearly implicated in compromising the health of millions:

Three Reasons to Get Essay Help

How To Write An Argumentative Essay

Tips On How To Write A Technical Paper That Stands Out