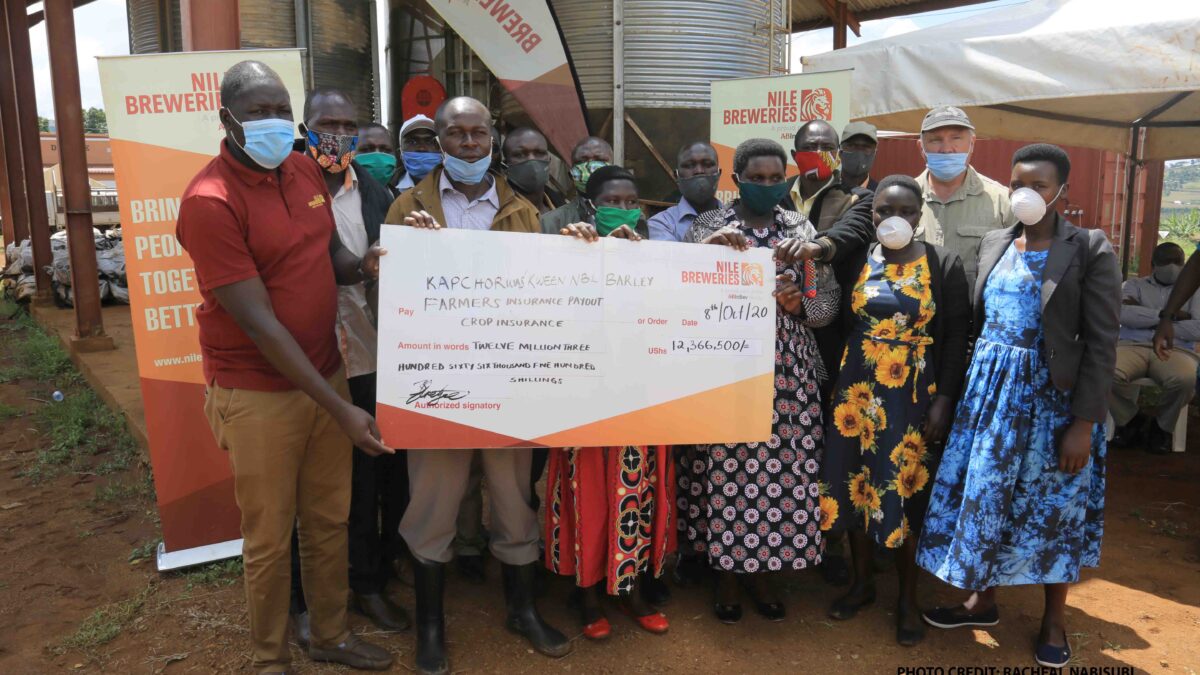 The first batch of farmers who had experienced too much rain during the crop cycle under its crop insurance scheme pose for a photo with some of the Nile Breweries Limited (NBL) staff. PHOTO by RACHEAL NABISUBI
Latest Articles

Weather changes are one of the biggest challenges that affect agriculture not only in Uganda but worldwide.

50 year old David Cherrey, a barley farmer from Kwenutcell, Kapron sub-county in Kween district located in the East of Uganda, says that the natural calamities such as excess rains in the region have greatly affected his output.

“When I had just planted my barley early this year; the crop which only takes three months to harvest was affected by the excess rains that left the garden flooding leading to loss of yields and income,” Cherrey says.

The father of six says that until last season, he has always been able to pay school fees for his children and improve his family’s welfare and wellbeing because of barley.

“The rains that affected my garden made me worry about how I could be able to recover income that would help me take care of my family and pay my children’s school fees since schools are reopening soon,” Cherrey says.

But through the barley scheme, he has been compensated.

“Women were never recognized in society especially in villages; they (women) did not have to take part in any business. I am happy today to note that women are able to start up their own businesses, improve their welfare and wellbeing of their families,” Chemilimo says.

The mother of 5 in her early 40s also engages in barley as a business.

She is happy to note that crop insurance schemes will attract more women into farming, especially barley farming to improve their household incomes.

In a bid to boost barley production in the Eastern region of Uganda, Nile Breweries Ltd (NBL) has paid over Shs12million to its first batch of farmers who had experienced too much rain during the crop cycle under its crop insurance scheme.

The Crop Insurance scheme was initiated by NBL’s parent company AB Inbev, as a means to achieve its agriculture sustainability goal to have 100% of its direct farmers skilled, connected and financially empowered by 2025.

Facilitated by OKO, an agriculture insurance, the pilot project has provided insurance to 60% of barley farmers. There are currently about 1631 barley farmers  registered under the crop insurance scheme.

The crop insurance process was incorporated into Banqu; the blockchain system used by NBL to engage with the farmers where payments are made via mobile phone, allowing farmers to track quantity and quality of supply.

Why the barley crop insurance scheme

Theunis Coetze Agro Manager, NBL said that farmers are a critical part of breweries value chain and are key for the sustainability of our business.

This follows ABInbev experience that farmers lose part of their income on a seasonal basis because of fluctuations in the weather. This is either flooding, or dry periods thus during crucial growth stages, the farmer then loses money because of a decrease in his harvest which negatively affects the cash flow of the farmers.

“Given our long standing commitment to farmers, we sought out a way to solve this dilemma as most farmers around the world lack financial safety nets to sustain bad seasons or grow their business.” Coetze says.

“The biggest impact on our farmers is that they will have the cash flow to honor their financial obligations, like paying for inputs and school fees even if they don’t have the full harvest income that they budgeted on. This will help to ensure their feasibility as farmers over the long term,” he adds.

Simon Schwall, Founder & CEO OKO, said that the crop insurance scheme is done by working with smallholder farmers within the supply chain to enhance their economic opportunities through different partnerships.

“We bring affordable and automated crop insurance to smallholder farmers via mobile,” Schwall said, adding that OKO is an innovative insurance product which automatically compensates farmers when insufficient or excessive rainfall is observed in their location.”

“We want to bring people together for a better world through providing not only quality seed to farmers, but support them to use best farming practices and also buy produce,” Ekomoloit said.

In addition, support our farmer communities through various initiatives like water stewardship, financial literacy and scholarships.